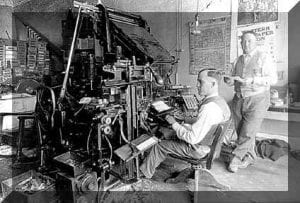 In 1902 the Flaxton Eagle was founded in the small northwestern North Dakota town of Flaxton. It was published there for a short time and then moved to Crosby June 9, 1905 by Julius Hage, where it was known as the Crosby Eagle. D.A. Gibbs acquired the Eagle in 1907 and published it until 1916, when he sold it to Divide County Publishing Co., which changed the name of the paper to the Divide County Journal.
The newspaper has been operated by three generations of the Andrist family since the fall of 1921, when Calvin L. Andrist and a partner, Nansen B. Henderson, purchased it and operated it until 1937, when Andrist bought out Henderson’s interest.
A competing newspaper, called the Crosby Review, was purchased by a group of pro Nonpartisan League farmers, and was renamed the Divide County Farmers Press. There was vigorous competition between the two newspapers for 25 years, with Andrist running The Divide County Journal and D.A. Gibbs publishing the Farmers Press. In 1946, however, Gibbs sold his assets to Andrist, and the Press ceased publication.
In the early 1950’s The Divide County Journal also purchased remaining assets of the Noonan Miner, to become the last surviving newspaper in Divide County. At one time there were 8 to 10 newspapers in the county — 2 each at Noonan, Crosby, and Ambrose, plus single publications for a brief time at Fortuna, Stady, and Willow Lake, among others.
Andrist was joined by his son, John, in 1950, and in January 1958 he leased the business to John, subsequently selling it on Jan. 1, 1961.
In the 1970s, John shortened the name of the paper to The Journal, reflecting a service territory that extended beyond the boundaries of Divide County. He sold the business to his son, Steve, in July of 1991. In October 1995, Steve purchased a second paper, The Tioga Tribune. Under the umbrella of Journal Publishing, Steve operated both papers until July 2012, when they were sold to longtime editor, Cecile Wehrman.